There’s an ecard that sums up the friendship JDL and I share: “I hope we’re friends until we die. Then I hope we stay ghost friends and walk through walls to scare the shit out of people.”

It’s a magical story, truly. It was a sparkly clear December day in 1989, and my Mom drove us across the river so that we could ride on a horse-driven sled. Along the way we stopped at a house five down, where another young girl lived. She had been dreaming of the day that she would be swept off her feet in such a fashion, for a sled ride and some ice cream, and that day had come.  I was 12, she was 11.

We were really lucky – Not only did we live five houses apart on a busy street filled with neighbors who bought their houses before settling into making baby boomers, but we went to the same small school, only a grade apart. She was a dancer, and had photos of all of the Bedazzled outfits she wore for shows and a dance studio on the third floor. She had an ever-changing collage above her bed, and had pierced ears and could watch PG-13 movies. I sewed scrunchies, which she wore loyally. I started a rubber stamp notecard/ t-shirt/ bookmark business called “Coloristic, Ink” [get it?] and taped Scholastic posters to my rolling window shades, because I wasn’t allowed to tack anything to the walls. I showed her all of the haunted places at our house, from the ivy-shrouded passage beyond the basement and the Alice in Wonderland hole [what?!] in our woods.  Together we dressed up in tube socks and kicky skirts [ours] and full make-up and crimped hair [hers] and walked up and down our street, waving to the senior [citizens] that drove by. At least, that’s how we remember it.

We’ve been, like, best friends ever since. With the top two girl names for about a decade and our shared love of Color Me Badd and Boys II Men, there was no separating us. We know the names of every crush the other had, and quickly bring them up even now when one simply must humiliate the other. Works every time.

When someone new comes into the fold, they must hear 24 years of jokes and jibes that are so practiced that we don’t finish one before the other tells the ending, therefore making fun of herself. That’s what best friends are for. So – Thanks to my current Superhero, and future ghosty! You put the “awe” in “awesome.”

P.P.S.: I fully expect a phone call about 2 minutes after I post this. I hope I can hear you through the screamed laughter. 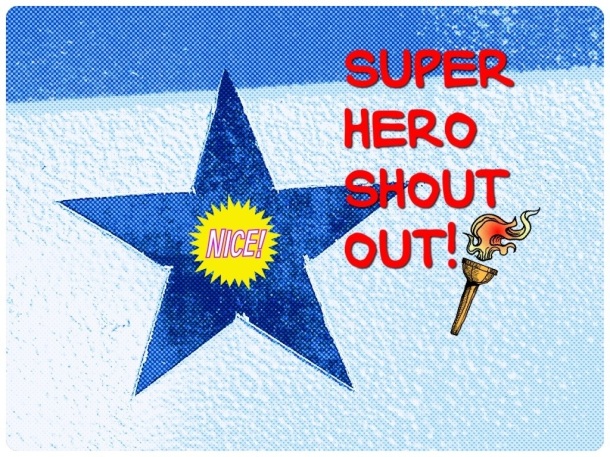 About Super Fabulous Getting By

So - Here's to making rules and breaking them, keeping healthy by being creative. We're all in this together. We've got to help each other out.
View all posts by Super Fabulous Getting By »
← Superhero Shout-Out: The Patron Saint of Rock-Solid Friendship
Superhero Shout-Out: Huzzah! →