Brian Wilson, Barenaked Ladies, and Me

When I was a senior in college, I had a car. I’d loved driving ever since I got my license – driving around the county, the state. I had loved figuring out how to get somewhere I hadn’t been since I was six. And, as everyone knows, music always sounds best when you’re driving, at night, passing the exit for where you’re supposed to be.

Those nights, when I was a senior in college and when I wasn’t able to sleep, or when I was freaked out, or when I was trying to do everything I could think of to NOT think, I would get in my teal Taurus wagon and head away from my apartment. And as soon as I signaled for my first right, I’d get my copy of Gordon ready. By the time I passed the second-hand CD store, I’d be well into the first verse of “Brian Wilson,” by Barenaked Ladies. I’d had the CD since 1993, but this song became the song.

Drove downtown in the rain/ nine-thirty on a tuesday night,/ just to check out the late-night/ record shop.

I was able to let go, to relax as the song looped and I drove toward the Conservatory or downtown or past new construction. The heater would eventually turn on, or I’d open all of the windows and breathe in the cold. I had a rule at the time: If I drove through two stop signs or red lights, it was time to turn back and head home. Until then, drive and sing to “Brian Wilson:”

The song just… matched me. Me, and how I felt whenever I got in that car, and how I felt as I drove. It was right. It was true. It was real. And so everything that was going on in my head and my life must have been real, too. The singer seemed to feel the way I did, and he seemed to think that was what it was like to be Brian Wilson. He (the singer) was reaching out to identify with someone. I was, too.

This week I read on BP Magazine‘s Facebook page that Steven Page, writer of “Brian Wilson” and lead singer of the same, has bipolar disorder. BP had attached a link to an article on MetroCanada about Steven Page‘s talk at Algonquin College, which has created support systems for students and staff  with mental illness. (Read the article, the resources look great.)

The article stated that “being an artist makes it easier for him to talk about his struggles.” Being a listener helped me understand mine. Thank you, Steven Page. 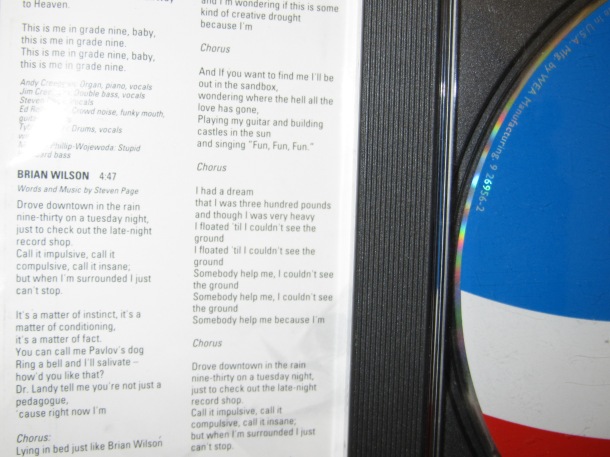